The Taj Mahal is widely regarded as one of the most beautiful buildings ever created. The exquisite marble structure in Agra, India is a mausoleum, an enduring monument to a husband’s love for his favorite wife.

It is also an eternal testament to the artistic and scientific accomplishments of a rich empire. Shah Jahan, “the King of the World”, took control of the throne of the Mughal Empire in 1628 in love with the queen he had nicknamed Mumtaz Mahal or “Chosen One of the Palace”.

The poets of the Agra court in Mughal claimed that her beauty was so that the moon hid her face in shame before her. The Mughals were at the height of their power and wealth during the reign of Shah Jahan, and the rich Indian gem of precious gems brought them much wealth and power. But he was powerless to stop Mumtaz Mahal’s death in childbirth in 1631. Legend has it that he bound him with the promise of a death birth to build the most beautiful tomb ever known.

The ornamental gardens are arranged along the classic lines of Mughal charbagh (formal Persian garden) – a square torn by streams, with an ornamental marble plinth in the center. When the fountains don’t flow, the Taj is beautifully reflected in the water.

The Taj Mahal itself stands on a raised marble platform at the northern end of the ornamental gardens, with its back to the Yamuna River. Its elevated position means that the background is just the sky – a design masterpiece. 40m high purely decorative white minarets fit into each corner of the platform. After more than three centuries they are not perpendicular enough, but they may have been designed to tilt slightly outward so that in the event of an earthquake, they would move away from the precious Taj. The red sandstone mosque to the west is an important gathering place for Agra’s Muslims. The identical building to the east, the jawab, was built for symmetry.

The central structure of the Taj is made of semi-transparent white marble, carved with flowers and inlaid with thousands of semi-precious stones in beautiful designs. A perfect exercise in symmetry, the four identical faces of the Taj are characterized by impressive vaulted arches embellished with hard stone scrolls and quotes from the Koran in a calligraphic style with inlaid jasper. The entire structure is completed by four small domes that surround the famous bulbous central dome. 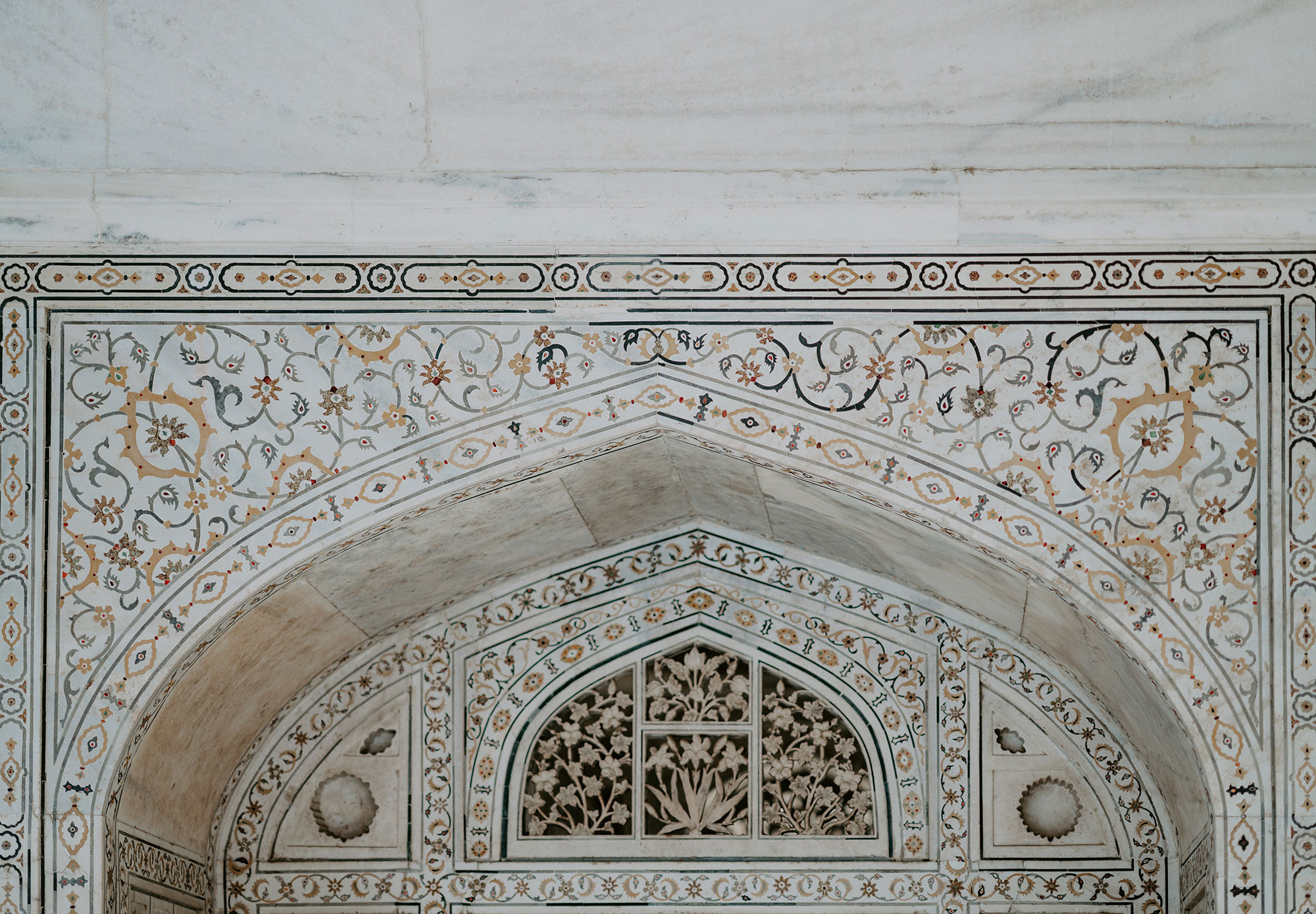 the Cenotaph of Mumtaz Mahal

Directly below the main dome is the Cenotaph of Mumtaz Mahal, an elaborate false tomb surrounded by an exquisite perforated marble screen inlaid with dozens of different types of semi-precious stones.

the Cenotaph of Shah Jahan

Next to it, offsetting the symmetry of the Taj, is the Cenotaph of Shah Jahan, who was buried here with little ceremony by his usurper son Aurangzeb in 1666. Light is admitted into the central chamber by finely cut marble screens. The real tombs of Mumtaz Mahal and Shah Jahan are in an enclosed basement below the main chamber and cannot be seen.