The Taj Mahal looms fairytale from the banks of the Yamuna River. It is the most recognized monument in India and is also one of the seven wonders of the world. The monument dates back to 1630 and is actually a tomb that contains the body of Mumtaz Mahal – the wife of Mughal Emperor Shah Jahan.

He had it built as an ode to his love for her. It is made of marble and took 22 years and 20,000 workers to complete. Words cannot do the Taj Mahal justice, its incredible detail simply has to be seen to be appreciated.

Here’s how to expertly navigate to India’s most famous destination.

For foreigners, the entrance fee to the Taj Mahal is 1,000 rupees. Indian citizens pay only 40 rupees. Children under the age of 15 are free. Tickets can be purchased at the ticket offices near the entrance gates or online on this site. (Note that Taj Mahal tickets can no longer be purchased at Agra Fort or other monuments and only offer a minimum discount if you wish to visit other monuments on the same day).

Security at the Taj Mahal is very strict. What you can and cannot bring into the tomb complex often depends on who is handling the rather chaotic airport-style security at the entrance doors (there have been instances where cell phones are not allowed).

Leave large bags and backpacks at your hotel or with your driver and carry only a small bag containing essential items. It is allowed to bring one video camera and one mobile phone per person. Video cameras are generally not allowed although sometimes you can pay a supplement for these at the ticket office.

Prohibited items include anything edible including sweets, headphones, cell phone chargers, other electrical items including iPads, pens of any kind, flashlights, knives, and camera tripods.

The complex is closed on Fridays. The east and west doors open from dawn to dusk; South Gate opens 8am to 5pm.

To protect the Taj Mahal from further pollution, motor vehicles are not allowed within 500 meters of the complex. There are three entrances: the West, South and East gates. The East Gate offers the easiest access from most hotels. Drivers must drop off visitors in the Shilgram car park which contains the ticket office which is on the right after passing through the entrance gate. (Note that some hotel concierge desks sell tickets to avoid the queue here.)

Show your admission ticket to grab a free bottle of water and shoe covers from the roadside kiosk next to the parking entrance. Electric trolleys and buses offer a transfer service to East Gate itself. If the queue is long, it is possible to walk for 15 minutes or hop on a pedal rickshaw for Rs 50 (55p) which can be negotiated from asking for Rs 100 (£ 1.10).

The tomb complex is wheelchair accessible. 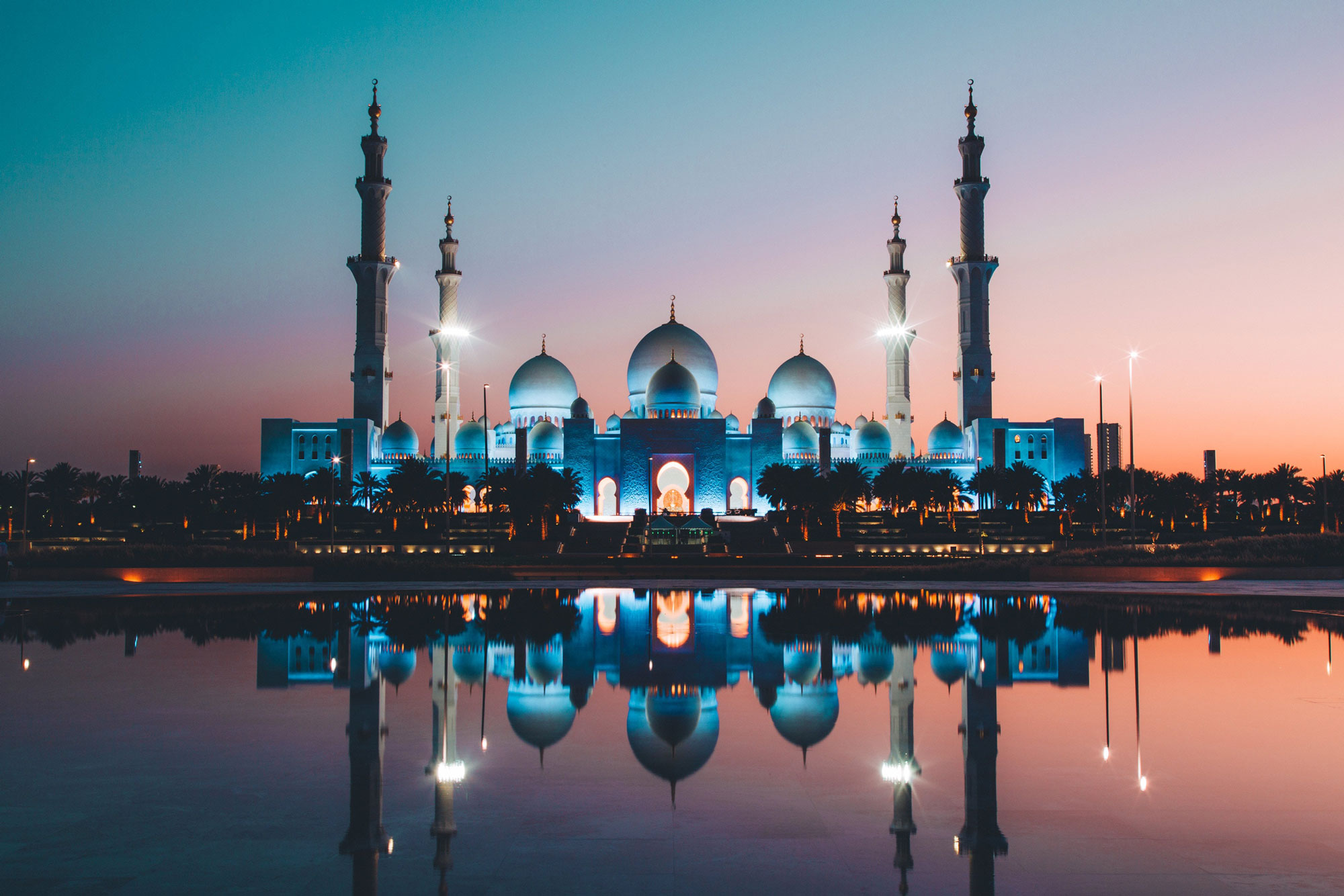 At the East Gate, you will find four lanes leading to security: foreign women, foreign men, local women and local men. To see the Taj Mahal with the fewest number of people, it’s best to arrive at the West or East Gates at 6.30am in winter – half an hour before it opens. (The South Gate doesn’t open until 8am).

Joining the queue at 7am can mean a 30 minute wait to reach security as a foreigner. If you don’t want to get up early – or it’s a very foggy morning – the queue is often shorter around 8:30 am after the first rush to enter.

Get a grip on the layout

The tomb complex is easy to navigate. Most visitors spend three hours here. All three entrance doors lead into a large arcaded courtyard where, in the past, visitors could disembark from their horses and crowbars. As you pass under the Great Gate, there is a strong sense of moving from the vibrant world of the city to the serene world of the mausoleum.

Set in a symmetrical Persian-style garden with lawns and streams divided by wide paths, the mausoleum is flanked by two nearly identical buildings: a mosque and a meeting room. On the left hand side there is also a small museum containing the plans for the original construction.

A large crowd is always found around what is now known to all as the Princess Diana bench, which is located on the opposite side of the pool on a platform above the central water channel.

Taj Mahotsav week takes place in Shilpgram in Agra, right next to the Taj Mahal, from February 18th to 27th each year. The focus of this festival is art, crafts, Indian culture and the reconstruction of the Mughal era. It begins with a spectacular procession that includes elephants, camels and drums. Elephant and camel excursions are available, and there are also games for children and a food festival. The venue has a special significance, as it is apparently located on the site where the craftsmen who built the Taj Mahal lived. 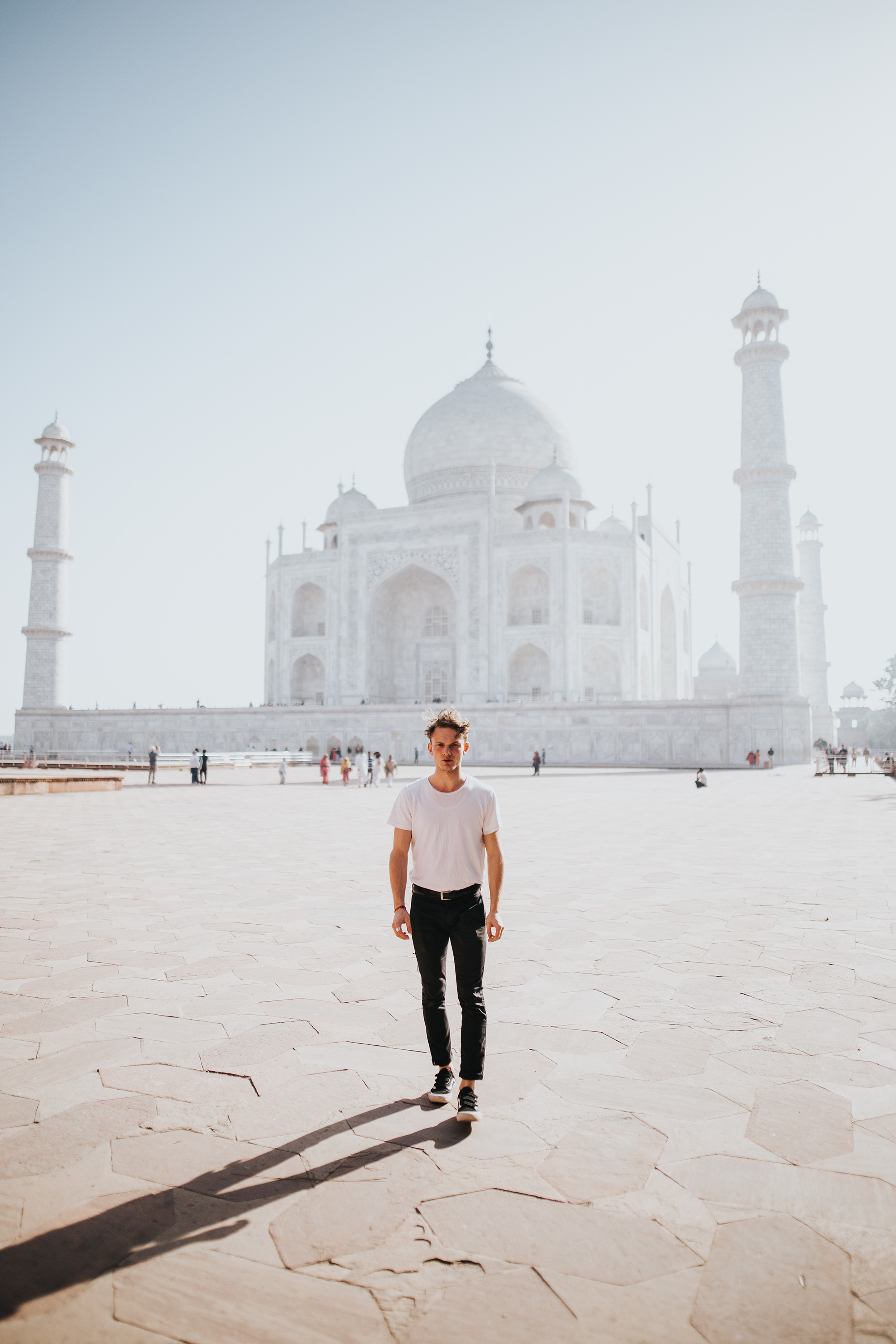 Arriving early after sunrise is the only sure way to avoid the crowds. From 10 in the morning until sunset Indian tourists arrive in large numbers and in large groups of tourists.

The mausoleum itself stands on a marble platform. Access is controlled to avoid overcrowding. Put on your boot covers and join the queue on the left for foreigners.

There is another queue to enter the mausoleum which contains marble cenotaphs of Shah Jehan and Mumtaz Mahal decorated with floral designs using semi-precious stones and surrounded by a sculpted marble screen. (These are commemorative sarcophagi, their graves are located on a lower inaccessible level).

The hard stone inlaid stone around the walls is surprisingly beautiful. However, it is difficult to see details in the dark, so use your phone’s flashlight.

There are aggressive and whistling security guards in the grave room to keep people moving. The thrust and thrust worsen as the day progresses and sadly, one must also beware of pickpockets.

To avoid the afternoon crowds – and get beautiful sunset photographs of the Taj Mahal – take a car or rickshaw across the Yamuna River to Mehtab Bagh Gardens on the opposite bank. On the way visit the “Baby Taj”, the marble tomb of Itimad-ud-Daula, father of Mumtaz Mahal.

Visiting the Taj Mahal can be overwhelming for all the wrong reasons. Be prepared to meet many beggars and vendors there. According to this news report, it has become an increasingly problematic problem and many visitors return home feeling scammed, threatened and abused. Touts operates in sophisticated gangs that have counterparts in other cities who identify potential targets at train stations. Once tourists reach Agra, tourists start harassing them by claiming to be guides or taxi drivers. They commonly use tricks like free taxi rides or the promise of big discounts.

Note: There are official 24 hour prepaid taxi rickshaw and taxi stations just outside Agra train station. Use them to avoid the hassle, and if you book a tour, check the quality of your vehicle to make sure it’s satisfactory.

Be sure to tell the auto-rickshaw drivers which Taj Mahal entrance gate you want to reach, otherwise you are likely to find yourself abandoned in the area where expensive horses and carts or camels wait to take groups of tourists to the west gate.

Apparently, there are only 50-60 approved guides at the Taj Mahal. However, more than 3,000 touts posing as photographers, guides or intermediaries, openly solicit customers at the monument’s three doors (especially at the west gate, which receives around 60-70% of visitors). Hundreds of street vendors (paying bribes to the police) are also a problem at the Taj Mahal, despite being officially banned.

Additionally, foreigners, particularly women and parents with young children, are often asked to pose for photographs (or even be photographed without permission) by other people, including groups of children. This can be intrusive and uncomfortable. This news article warns about selfie seekers at the Taj Mahal.

Finally, beware of the infamous gem scam, which is alarmingly prevalent in Agra.

find out when to go
find out how to get there