how to get there

The largest human monument dedicated to love. “A tear on the face of eternity” (wrote Rabindranath Tagore). The place that launched a million post card sellers (he wrote to us). The Taj Mahal – that pearl-white, extravagant mausoleum that shines along Agra’s Yamuna River – has certainly garnered more than its fair share of flamboyant epithets, not to mention tourists; it has to be the most visited place in India by a country mile. Not without reason: to see the Taj materialize in the aurora glow, ghostly and more fragile aspect of something so great has a right to be, it is truly a spiritual experience. match. With all that Machu Picchu has to offer, it’s easy to see why so many are drawn to the visitor’s heart from Peru.

The final decision is how to get there. You can visit the Taj Mahal from Delhi on a day trip. You can go by train, bus, private car and driver or as part of a tour. Whatever you decide, book well in advance or you might get lost!

The Taj Mahal appears to gradually alter its color in the changing light of the day. It is worth the effort to get up early and spend the sunrise there, as it majestically reveals itself. Visiting sunrise will also allow you to beat the huge crowds that start arriving later in the morning.

From Delhi to Agra

The Taj Mahal is located in the city of Agra. Agra, in the state of Uttar Pradesh, about 200 kilometers from Delhi. To go from Delhi to Agra, you have the following options:

1. From Delhi to Agra by train

The main railway station in Delhi is the New Delhi Railway Station (NDLS), near Paharganj.

Trains to Agra also depart from Delhi from Hazrat Nizamuddin (NZM) Railway Station, which is approximately 20 minutes south of New Delhi Railway Station. This station is more convenient for those staying in South Delhi.
Agra’s main train station is Agra Cantonment (AGC).
Trains are often delayed during the winter (December to March) due to fog.

Best Delhi trains in the morning to Agra

These Delhi Agra trains all have chairs, not sleepers.

The fastest morning train from Delhi to Agra is the new 120at Gatimaan Express non-stop. This train, which is India’s first semi-high-speed train, started operating on April 5, 2016. It travels at a maximum speed of 160 kilometers per hour and takes an hour and 40 minutes to reach Agra. The train departs Delhi’s Hazrat Nizamuddin Railway Station at 8.10am and arrives in Agra at 9.50am. The fare for the executive class 1AC (first class, with air conditioning) is 1,505 rupees. CC (car seat, seat, air conditioning) is 755 rupees. The train runs every day except Fridays (when the Taj Mahal is closed). There is onboard catering, with Indian and Continental cuisine served. The train also has hostesses and multimedia facilities. Its cleanliness, food and ticket availability are all excellent. Plus, it’s the most punctual train with minimal delays. See train information.

The second best option is the 12002 New Delhi Bhopal Shatabdi Express. This train has one stop. It departs at 06:00 from New Delhi Railway Station and arrives in Agra at 7.57am. The fare for executive class 1AC (first class, with air conditioning) is 1,050 rupees. CC (car seat, seat, air conditioning) is 555 rupees. The train runs every day. Its ticket availability is excellent and cleanliness is good. However, it is known to reach Agra up to 30 minutes late. See train information.

The 12280 Taj Express Supergrast from Hazrat Nizamuddin train station in Agra is also very popular. It leaves at 7:00 and arrives in Agra at 9.38. The rate in CC is 370 rupees. 2S (second class, seated, no air conditioning) is 100 rupees. The train has three stops and runs every day. It also has excellent ticket availability. The only problem is that punctuality can be an issue, with delays of up to 1.5 hours in arrival time. See train information.

The best late afternoon trains from Agra to Delhi

These Agra Delhi all have chairs, not sleepers.

The 12049 Gatimaan Express departs Agra at 5.50am every day except Fridays. Arrive at H Nizamuddin Railway Station in Delhi at 7.30pm. It is the fastest and most punctual train from Agra to Delhi. See train information.

The 12279 Taj Express Superfast returns to Delhi from Agra at 6:55 pm every day (although it often reaches Agra more than an hour late, as it comes from Jhansi). Arrive at H Nizamuddin train station at 10.05am. See train information.

12001 Bhopal New Delhi Shatabdi Express departs Agra at 9.15pm. and arrives at New Delhi railway station at 11.30pm daily. However, the train arrives up to 2 hours late, as it comes from Bhopal. See train information.

Other trains from Delhi to Agra

There are many other sleeper trains running from Delhi to Agra, and vice versa, during the day. These trains can be found here (Delhi to Agra) and here (Agra to Delhi), or by searching the Indian Railways website. However, the trains listed above are the most reliable.

A word of warning: dangers and hassles

When you arrive at Agra station, be prepared to be approached by beggars and touts. Touts operates in sophisticated gangs that have counterparts in other cities who identify potential targets at train stations. In Agra, touts commonly claim to be guides or taxi drivers, and use maneuvers such as free taxi rides or the promise of deep discounts. There are the official prepaid taxi cabs and cabs available 24 hours a day just outside the Agra train station. Use them to avoid problems.

The new Yamuna Expressway (inaugurated in August 2012) has reduced the travel time by road from Delhi to Agra to less than three hours. You leave from Noida and pay a toll of 415 rupees per car for a one-way trip (665 rupees round trip).

Why rent a car and a driver?

Why not just rent a car and drive yourself? Or take the train or fly? Or take a ride? Renting a car and driver is ideal for independent travelers who want flexibility and control over their itineraries and ease of travel.

You will be able to stop at the places that interest you and you don’t have to worry about how to get around. While the options for self-driving car rental are growing in India, self-driving is not recommended for reasons of mental health and safety, as the roads are often in poor condition and road rules are often not followed in India.

Where to rent from?

Any tour company in India will be able to arrange a car and driver for you, as will most hotels. However, if something goes wrong (such as the car breaking down or misunderstanding), you will want the company to be responsible for it and not the driver. Hotel rates will also be more expensive. Hence, it is best to book through a reputable company. These companies will also arrange hotels and guides if needed.

What to keep in mind

The condition of the roads in India is variable and can be very poor in some places. It may take longer to reach your destination than expected, so keep this in mind when planning your itinerary and give yourself plenty of time. Don’t always believe the travel times shown by Google Maps!

If comfort is a factor, it’s worth paying more to get a better vehicle like a spacious Toyota Innova or Mahindra Xylo. Roads that are in poor condition tend to be bumpy and the lack of decent suspension in older cars will be very noticeable. Also, most people prefer to choose a car with air conditioning, because the roads can be dusty and the climate hot.

The tax for vehicles to cross state lines can be expensive, so check if this is included in the listed price.

The tax for vehicles to cross state lines can be expensive, so check if this is included in the listed price.

Drivers do not act as guides. They will take care of your itinerary, lead you to each destination and answer general questions. However, they will not accompany you inside monuments and attractions.

3. Take a tour of the Taj Mahal

Viator (in partnership with Tripadvisor) offers a popular and highly regarded Agra Day Tour and Delhi’s Taj Mahal, as well as a combined Agra and Fatehpur Sikri Day Tour and Agra Day Tour with Cultural Walk. It’s also possible to see the Taj Mahal at night during a full moon on this 2-day private Agra tour from Delhi.

If you are looking for an inexpensive tour option, UP Tourism arranges full-day daily bus tours to the Taj Mahal, Agra Fort and Fatehpur Sikri. The cost is 650 rupees for Indians and 3,000 rupees for foreigners. The price includes transport, entrance tickets to the monuments and guide costs. 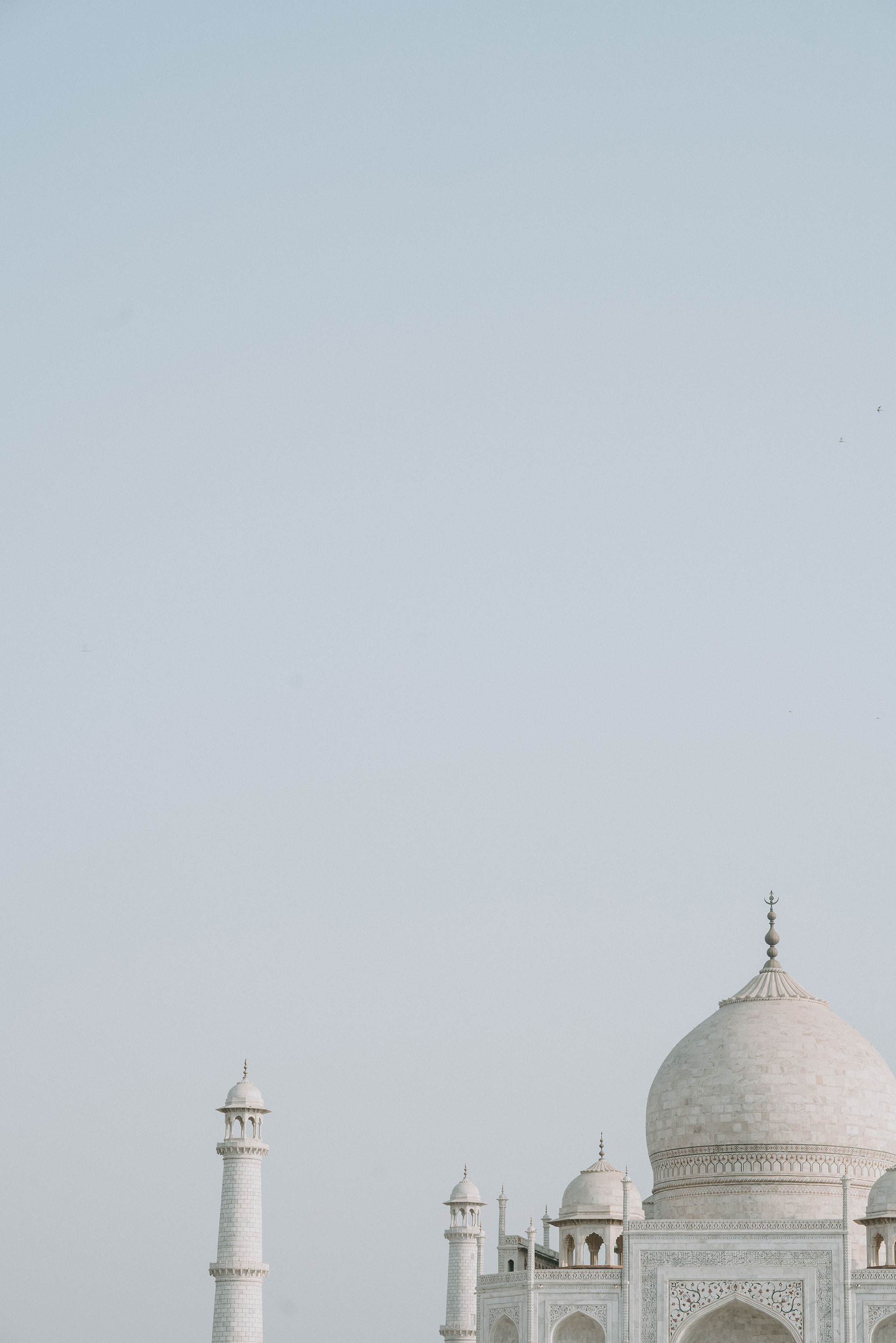 Just outside Agra Cantt station is the prepaid autorickshaw stand, which gives you a good guide for haggling elsewhere. Usually, trips shorter than 3km shouldn’t cost more than € 50. Always accept the fare before entering the rickshaw. 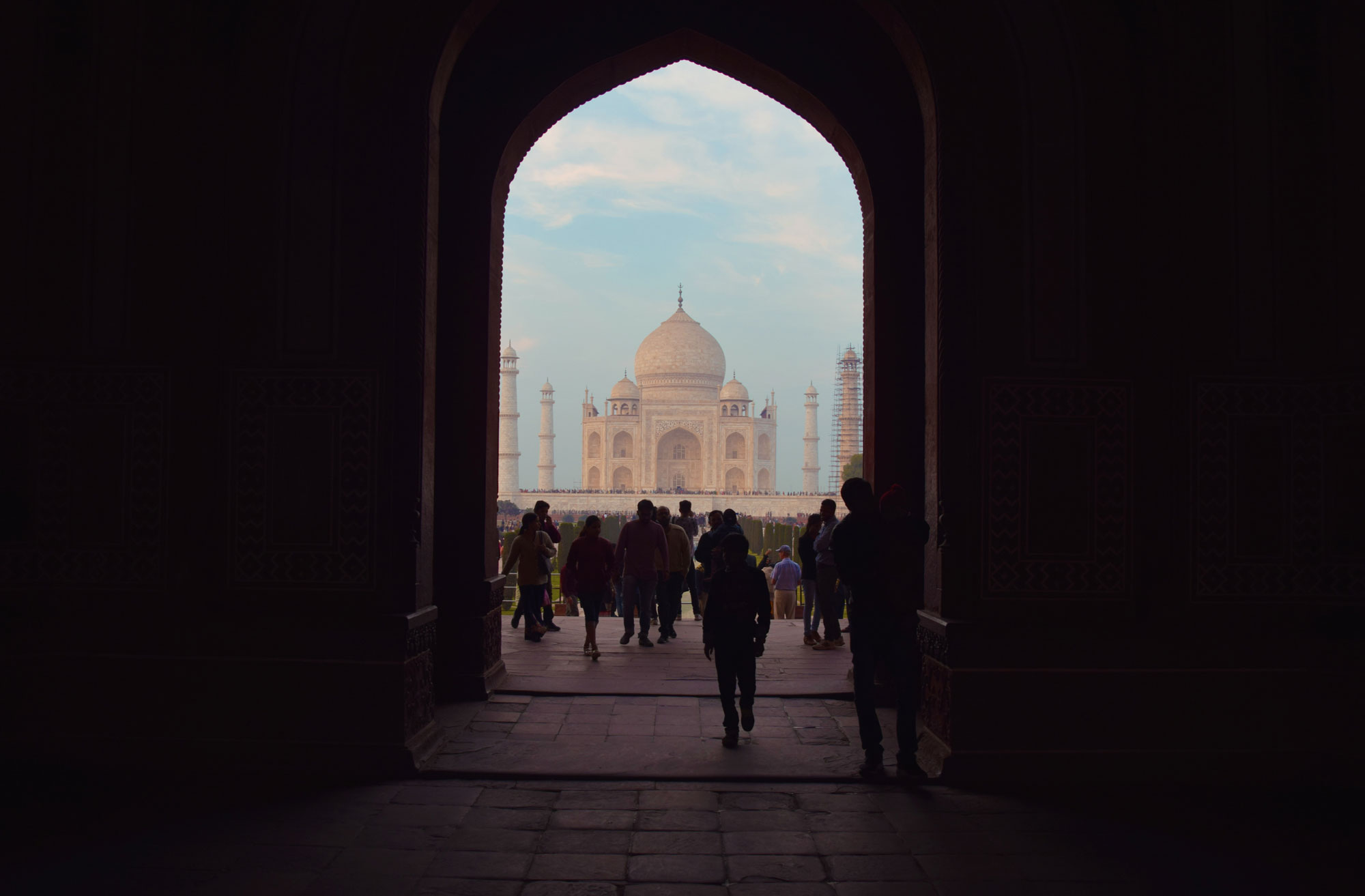 How can I reach the Taj Mahal site?

Vehicles are not allowed within 500 meters of the Taj Mahal due to pollution. There are three entrance doors: south, east and west.

The west gate is the main gate that most local Indian visitors enter, and generally has the longest lines during the day. However, it is the preferred sunrise option to avoid the crowds at the east gate.

The east gate is popularly used by foreign tourists, as it is closer to a number of famous hotels. It usually has shorter queues except at dawn when larger groups tend to arrive there. If you buy your ticket in advance the day before, it’s still the best entry point. Note that the ticket office (in Shilpgram) is in a disadvantaged location about a 10 minute walk from the gate.

Buses, golf carts, and cycle rickshaws are available for those who can’t or don’t want to walk.

The south gate is the least used gate. It is close to a congested market area where many of the budget hotels are located, making it favored by budget and independent travelers. However, it doesn’t open until 8am. A huge sandstone portal provides access to the interior compound. 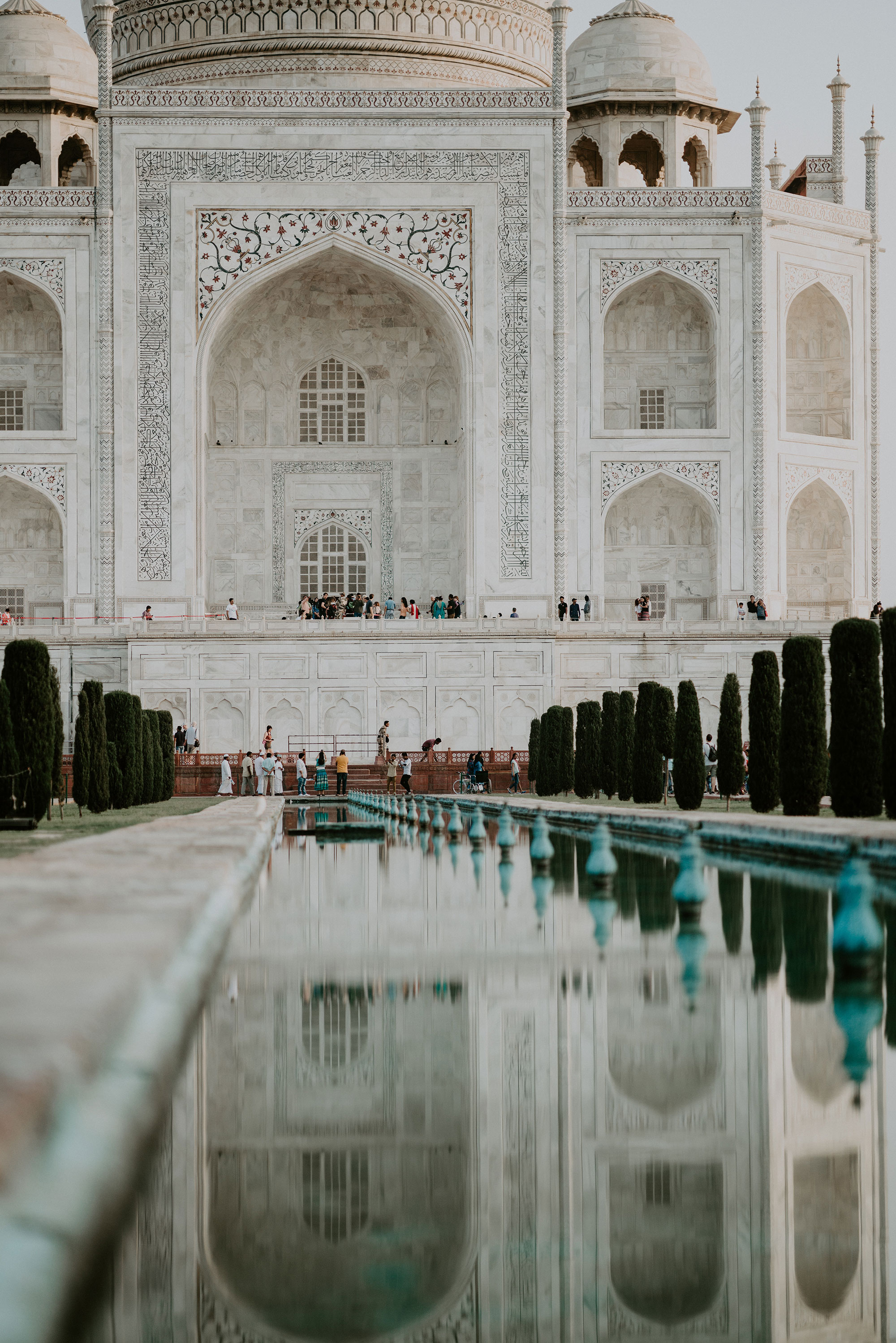 What do you think of a guide?

In my view, the guides here are a distraction. They rattle off history and statistics and don’t give time just to sit in silence and admire the ethereal perfection of the building. Instead, rent a portable audio guide. These are available next to the Shilpgram ticket counter for Rs105 (€ 1.50). You must leave a photo ID for security.

You can also download the audio guide to your iPhone for € 4. Enter AudioCompass (audiocompass.in) in the App Store search.

Local “professional” photographers are also welcome in the complex and will want to take a series of photographs in the best spots. The quality of your printouts is generally poor (although some do give CD-ROMs). If you want to use their services, bargain hard and ask them to use your camera.

Strict security is in place at the Taj Mahal and there are checkpoints at the entrances. Your bag will be scanned and searched. Large bags and day packs are not allowed inside. Only small envelopes containing essential items are allowed. This includes one cell phone, one camera and one bottle of water per person. You cannot bring in edible products, tobacco products or lighters, electrical items (including phone chargers, headphones, iPads, flashlights), knives or camera tripods. Cell phones are also banned during night vision sessions, although cameras are still allowed. Luggage storage is provided at the entrance gates.

Unfortunately, many of Agra’s hotels are as uninviting as the city itself. However, there are accommodations to suit all budgets.